The Cave of Perama

The Cave of Perama, a magical Wonder in Ioannina 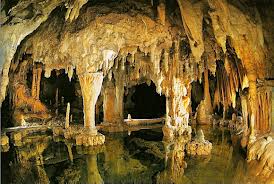 One of most beautiful caves in the world is located only four kilometres from the city of Ioannina, in the village of Perama.The Cave is well known as the Cave of Perama and every year gathers thousands of visitors to see it.

How was Perama Cave Created?

It took nature 1,500,000 years in an area of ​​14,800 square meters, which is inside the Goritsa Hill, at the foot of which lies the lake Pamvotis, to create dazzling formations of Dropstones (Stalaktites) and Flowstones (Stalagmites), to form the Cave of Perama in Ioannina.

All guests are covering a distance of 1,100 meters, sometimes climbing and others descending the cemented paths and steps, being guided for over 45 minutes in one of the wonders that only nature can create with patience and imagination. Within 19 large and small halls, where an awe-inspiring magnificence or  a fear of  the eerie shadows lies, there is  an underground glowing richness, easily  compared  to the mythical kingdom of the underworld, being exposed in Hall No8 , while  Pluto and Persephone are not there.

Halls 2 and 3 are the “Halls of Mythical Palace”, and the largest of the Cave of Perama, breathtaking in their beauty with ornate ‘sculptures’ created by the time and the water, and dominated in every corner, but equally impressive is the little

Trees, flowers caves, water lilies, fountains, chandeliers, the Egyptian Sphinx, the Santa Claus, Easter candles, the Tower of Pisa, the manger of the Christ, the Statue of Liberty and many more are represented in the Cave of Perama, having being tribute as a result of the fertile imagination of the pair of cavers John and Anna Petrochilou, who explored the cave in 1956.

However, first reports were made by amateur caving and physics professor K. Kasvikis, who first gave to the press photos of the Cave of Perama, triggering worldwide interest.

How was Perama Cave Found?

The existence of the cave was already known from the beginning of last century; in 1940 as it was actually used as a shelter for residents during the bombing of the Italians, during World War 2.

In 1954 the first scientific mapping was shown by a pair of cavers Anna and John Petrocheilos, who had explored other known caves in Greece.

How you can visit Perama Cave and Hours Operation

All guests who want to visit the Cave of Perama can do that by car, because it’s only 10 minutes from the centre of Ioannina City. Also if you do not want to use

is a line from Perama to Ioannina, starting next to the City Clock, one of the most central locations.

In the projection room of the centre operating   from 09:00 to 16:00, the visitor has the opportunity to attend a twenty-minute documentary entitled “The World of Caves.” The documentary, made by a team of scientists from the Inspectorate of Paleoanthropology and Speleology in Athens and from Ministry of Culture, and refers to the creation and types of caves in such decoration in paleontological and archaeological remains, fauna and the relationship between humans and Caves.